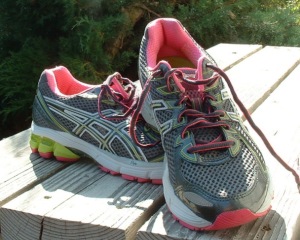 Good news everyone!  I bought new shoes. You can see them in the header, along with my other two pair, and here is an even better look at them. Aren’t they… um… Well, I’m sure plenty of people think they’re pretty. For my friends who are currently looking at them with confusion, yes I realize they are pink. Pink really isn’t my color, generally. I bristle at the “pink for girls” thing, but this blog isn’t about politics. It’s about running, so I won’t really go into the whole pink issue other than to say that there are more important things to consider when picking out running shoes. Also, some time ago a gentleman on Fitocracy mentioned disliking the color of his new shoes and other Fitocrats advised him that the best thing to do when you think your shoes are ugly is to go out and run in them and get them dirty! So that is what I will do.

These new Asics are my first road shoes. My two previous pair were somewhere between a trail shoe and a road shoe. Hybrid, if you will. I initially made the choice to go with those shoes because I was used to walking in trail shoes and found them comfortable. When I bought the Mizunos, I was looking for a shoe that was as similar to those Asics as possible, because I meant to be switching between them during my marathon training and didn’t want shoes that were too different. Now that I have some time before any big races, I feel that it’s time to try out a road shoe. The other problem I’m having is that the Mizunos aren’t quite right for me. I’m told that on paper they’re a nearly identical shoe to those first Asics, but there is something about them that isn’t working out for me. I can wear them on a short run or two each week, but any more than that and my calves start to get really tight. I honestly don’t understand how or why that is happening, but last weekend I switched back into the old Asics just to see if it would make a difference and it did. So when I saw a post on Facebook that Runner’s Edge was having a “garage sale” I knew I had to go down and try to find a new shoe. I even followed my own advice, and brought both of my other pair with me and asked for help picking out a new pair. Now, to be clear, I am in NO way suggesting that Mizunos aren’t a great shoe. That particular pair just isn’t right for me, at least not for heavy use and longer runs.

That said, I still think that the Mizunos will be the right shoe for my next race. I’ve registered for the Sentinel Hill Climb race on November 4th. It’s a short race, but still very challenging. A friend sent me the information after we chatted about how difficult it can be to get motivated to run hills. Since I plan to do the Pengelly Double Dip next year, I need to start doing a lot of hill work. The Sentinel Hill Climb is going to motivate me to get started. Being someone who accepts her slowness, I seek a different sort of challenge. I don’t need to run fast. I don’t even need to win my age group. I race to challenge myself, to stay motivated and to have fun. So for me, since I don’t really plan to get much faster, my challenges lay in running farther and in running more difficult races with lots of elevation gain.

Finally, I will say that I had a rough run yesterday. I slept in, so I missed the breakfast run and went out on my own later in the morning. I was determined to do a 13 mile run, so I plotted a course, created a playlist that was part music and part podcast and off I went. I started out slow and easy but I just couldn’t find my groove. Being alone, I think I spent a lot more time paying too much attention to myself and over-thinking things. I just was not feeling it and could not seem to pick up the pace. At about 12.3 miles I did get a boost, however, as that was when Eye of the Tiger came on my iPod. Maybe it’s a generational thing, but I don’t know too many people who aren’t pumped up by that song. I’m thinking I should download the Rocky Theme and put it toward the beginning of my playlist, with Eye of the Tiger toward the end, so that I can get pumped up by both of them.

There are more “Tips for New Runners” posts coming. I’ve just been very busy this last week or two. There’s also a blog-roundup post coming about other running blogs that I like. So keep checking back or subscribe to my rss feed and I’ll keep telling you about my experiences. Happy running!

6 thoughts on “New Shoes, A New Goal and a Difficult Run”